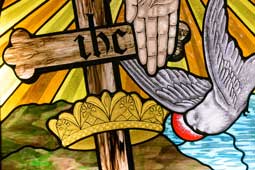 There is one divine essence, which is called and which is God, eternal, incorporeal, indivisible, of infinite power, wisdom, and goodness, the maker and preserver of all things, visible and invisible.

Yet there are three persons, of the same essence and power, who are also coeternal: the Father, the Son, and the Holy Spirit. And the term “person” is used, as the ancient Fathers employed it in this connection, to signify not a part of a quality in another but that which subsists of itself. (Article 1, The Augsburg Confession).

On the Devine level, you still find personalities but there you find them combined in new ways which we, who do not live on that level, cannot understand or imagine.