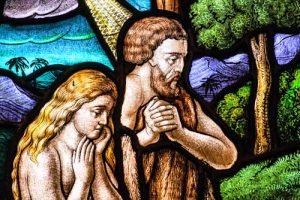 Adam and Eve knew God. They had personal, face-to-face, experiences with God. They walk with Him in the garden, they had conversations with Him, and God instructed them in His will.

Sin came into the world through the fall of Adam and Eve, as described in Genesis chapter 3. The fall, Original Sin, was the worst catastrophe in the history of the world. It brought death into the world (Rom. 5:12-19) and resulted in the total corruption of mankind (Rom. 3:10-12).

Adam and Eve did not believe God or trust His Word. When the serpent lied to them, telling them that they would not die if they ate the fruit and that they would become like God, they disobeyed God and ate. It was that doubt of God’s Word that broke the relationship between God and Adam and Eve. That was the Original Sin. It was, and is, that attitude of doubt and not trusting God that is at the root of all sin.

By this fall not only did Adam and Eve themselves, but also their natural offspring, lose the original knowledge, righteousness, and holiness. They were no longer able to be in the presence of God and were forced out of the garden. “Since the fall of Adam, all men who are propagated according to nature are born in sin” (AC, II, 1). Thus all men are sinners already by birth, dead in sins, inclined to all evil, and subject to the wrath of God, (Rom. 5:12, 18; Eph. 2:1-3).

God’s law shows us how He wants humans to be. Before the fall, His law was part of Adam and Eve’s being and thinking. It was written on the heart, meaning that they had a conscience. After the fall, our understanding of God’s law weakened so God wrote down His law which has become known as the Ten Commandments. This is God’s will for us as we live our lives.

Actual sin refers to our acts, whether by thought, word, or deed, that are contrary to God’s will. Original sin causes actual sin. Original sin is the disease, actual sin is the symptom that tells us we have the disease. We are not sinners because we sin. We sin because we are sinners. And sinners must die, for the wages of sin is death (Rom. 6:23).